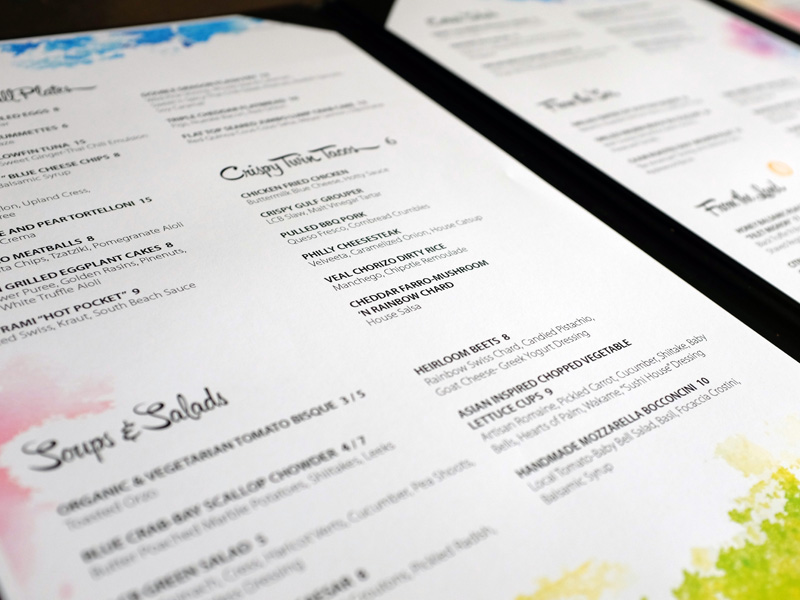 A lot goes into the design of a great restaurant menu. And a carefully crafted menu in both design and content can greatly aid the serving staff as well as bring in thousands more dollars to the bottom line in a short period of time. No other design project is harder and more tedious as notes from chefs are often cryptic and almost every other word is a proper noun. One vendor change or variation to a recipe can translate dozens of changes to the copy. Ahhhhhh.

That aside, an investment in thoughtful menu by someone who knows what they are doing will probably give you a return of 30 times what the design cost you as most establishments seem to think having the owner, secretary or chef bang out the menu in MS Word is adequate the the food will always speak for itself.
So even if you don’t want a menu professional to layout your new menu here are some tips and nuances to consider on your next incarnation. If you do want to elevate your menu to a new level give Imagica a call at (941) 350-9064 for a quick estimate how a new menu will bring you a greater return and ways to leverage a new menu to bring in new customers to your restaurant.

1. A CIA study showed that if a dollar sign is used in the price, diners are more likely to buy cheaper options. Even more so for euros or pounds, as those symbols are terrifying to the eye and the wallet. Plus, if you are in America, they obviously know you are talking about dollars. Really.

2. The average time a customer spends on a menu is 109 seconds.

3. It’s important for the guest to see all the menu items at once, so anything more than a tri-fold is too big. If it’s too bulky, the diner won’t be able to process it, and they’ll give up and order something they don’t really want which will reflect poorly on your establishment even if the entire meal from food to service was executed to perfection.

4. If prices are in a column, it will result in price shopping. Stagger them three spaces from the last letter of the menu description without any dots or dashes to draw the customer’s attention away from the fact that they’re paying $20 for roast chicken.

5. From experience the most popular dessert menus include the five C’s: citrus, coffee, caramel, chocolate, cheesecake. Something for everyone.

6. Desserts shouldn’t be on the main menu. If they see an eye-catching dessert at the beginning of the meal, they’ll often skip an appetizer. Savvy restaurateurs know to surprise the diner with a dessert menu after the main course in order to bask in the profits of both appetizer and dessert sales.

7. Don’t capitalize everything. It’s okay to capitalize the dish name, but for descriptions use lower-case in order to slow down the reader’s eyes and keep them from glossing over the whole menu.

8. The eight biggest allergies are nuts, peanuts, milk, wheat, eggs, fish, shellfish, and soy. It’s important more than ever to list these in any component dish descriptions. Gluten free is becoming a VERY big deal.

9. On a two-page menu, most people will first look just above center on the right page. Next, people look at the first and last items on the list. Loading these areas with your highest profit-margin foods is a dastardly trick, but putting the best dishes in these spots will fool the patrons into really enjoying their meals.

10. If you didn’t know a healthy rule of thumb for a balanced menu is 10 apps, 10 mains, and six desserts, with at least one or two vegetarian apps and entrees and some gluten free selections in your protein categories. Big menus don’t bring in more dollars. It’s better to update, have verbals or change your menu than to include everything on one. It will give you more to promote and talk about down the road.

Simple pleasures are the best 💦 - - - #sarasota

Just another day in Sarasota at #marinajack. Quite

Enjoying being off grid much of the summer, playin

People are absolutely terrified of anything they d

Shoutout to #flstateparks for being outstanding cu

“You become responsible, forever, for what you h

Really good field marketing initiative beginning today from Blue Bunny. Illustrates that there is a time and place for everything. ... See MoreSee Less

Get Some Blue Bunny Funlightenment! Branding, Marketing & Advertising Creative marketing for challenging times Sometimes even a modest initiative can give you a big bang if leveraged in the right way. A prime example of this is by Blue Bunny Ice Cream. A few of you may have heard of it, fewer still....
View on Facebook
·Share

Share on FacebookShare on TwitterShare on Linked InShare by Email

Share This
We use cookies to ensure that we give you the best experience on our website. If you continue to use this site we will assume that you are OK with it.Ok